Back to all posts

This will be a (hopefully) regularly updated blog in which we will post...blogs about the things we are doing and what's happening in the band. I have been tasked with the honorable...task of publishing our first blog, and given that we are releasing our amazing single this Friday I thought it would be a good idea to nerd out on all the deliciously nerdy and geeky details of how the single came to be and all the things behind the production. So, let's get started!

We started the whole process in...August I think. We began with some pre-production, which the way I like to do it is to come up with a quick demo of the song that we can all listen to and decide on changes to. We recorded everything in my room, using Addictive Drums for programming the drums. There was already a drum line written for Fight The Horde, so for me it was just a matter of writing it down in MIDI, but I had to come up with the drum parts for The Mantra from scratch. The way I use Addictive Drums to get as realistic a drum sound as possible is this: I write all the parts in MIDI, and adjust the velocity for each individual hit manually, I change put in some micro-changes in the timing to give it a more human feel, and finally (probably the most important step), I get rid of all of Addictive Drums own plug ins and export each individual track, so what I'm left with is the individual drum tracks in its rawest form. Then I edit them accordingly in my DAW. The guitars were recorded directly into my Tascam US-144 interface and ran through Amplitube. The guitars are all double tracked for maximum awesomeness. The bass was recorded a bit more differently: the bass ran through a Boss ODB-3 pedal with the gain set all the way down, into my Warwick Profet 5.2 amplifier which went DI into my Tascam. From there I used Amplitube again on the Gallien Kruger amp and the result is amazing! Vocals were recorded with my housemate's microphone, which I can't remember for the life of me what model it is.

Once the pre-production demos were done, I was able to determine how much time we'd need to get the best performances out of Kitty and John as possible and recording the demos with them made me understand better how to get the best out of their performances. We discussed all the things that we wanted to do differently in the actual recordings and when we all agreed on things it was time to start recording! Fortunately, uni hadn't started yet and Kitty wasn't working at that point so we had plenty of time to get solid takes from everyone. I got the drums all ready and set up on the DAW (I use Logic Pro 9) which I only had to re-tweak a little bit from the demos, and we got to recording the guitars. The guitars are all double tracked except for leads, which are single tracked. John and Kitty struggled to nail some of their parts 100%, so we really had to use all the time we could. Overall I think it took about 2 days each to finish their parts for one song. I got them to do it as best as they could, then edited them manually using good old Flex Time in Logic Pro 9 (using the polyphonic setting) so the doubled takes would match with each other. We had to cheat a little bit for the ending of the solo in The Mantra, muting the living shit out of all the strings and using a capo backwards so John could reach his notes...sometimes you just gotta get creative!

The bass was relatively easy...I used the same setup as in the demos (because it sounded awesome), played through it and BAM...done!

The vocals were...a bit more tedious. I used the same mic for everything (except the extra bits on Fight The Horde, I used a shitty Sennheiser mic to make it sound...shitty), but I put up a mattress and some blankets in a hallway for isolation. Kitty went through her vocals just fine for Fight The Horde, all of which were double tracked, but she had more troubles with The Mantra given the fact that it's a harder song to sing AND she had a cold of some kind. She did it in the end, although I had to cheat a bit here and there and edit the fuck out of the last bit. My vocals were a tragedy to record because I'm not a singer, but fortunately since I'm the one mixing it and recording it I could take my sweet ass time and fuck about as much as I wanted to without getting lost!

Mixing these songs was a whoooole other thing. But that's a story for another time... 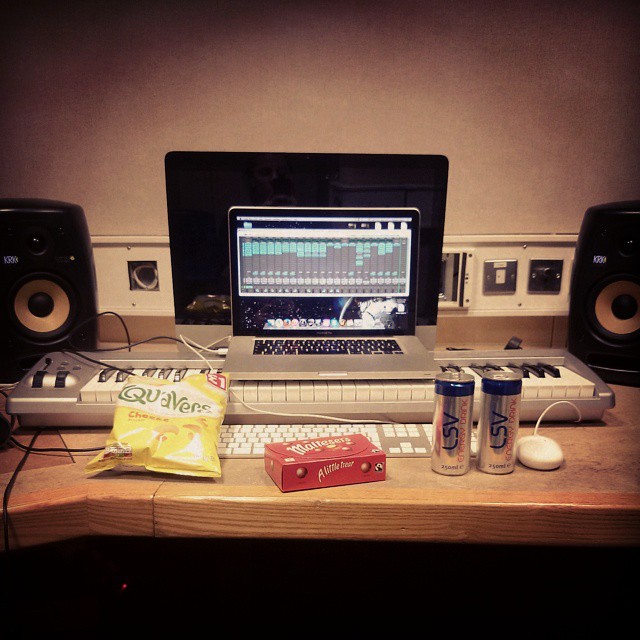